An oldie, but a goodie! In honor of the midnight release of the Twilight Saga Eclipse, here is a pic of our red velvet twilight cupcake. More importantly, are you Team Edward or Team Jacob?? 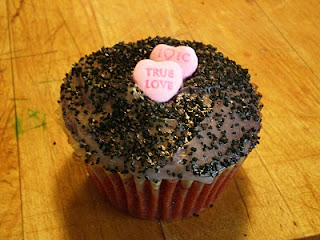 Looking for an easy and delicious dessert?? Try cream puffs!! The recipe below is taken from Betty Crocker's New Picture Cookbook (first edition, printed in 1961). Gotta love the retro cookbooks! I wish you could see these illustrations!! Classic!


1.) Preheat oven to 400 degrees
2.) Heat water and butter to a rolling boil in saucepan
3.) Stir in flour over low heat and continue stirring vigorously until mixture forms a ball (about 1 min)
4.) Remove from heat
5.) Beat in eggs thoroughly, 1 at a time. Beat until smooth
6.) Spoon into ungreased baking sheet into mounds 3 inches apart
7.) Bake 40-50 mins or until puffed, golden brown and dry.

You can also opt to place the dough into pastry bags, and pipe out 12 fingers, 4 inches long and 1 inch wide OR (mini) "petits choux" for a bite-sized ending to a special meal or party! But be sure to cut the baking time to about 20-30 mins if you make smaller puffs!

1.) Mix sugar, flour and salt in saucepan
2.) Stir in milk and cook over medium heat, stirring until it boils
3.) Boil 1 min then remove from heat
4.) Stir a little over half of mixture into egg yolks, then blend into hot mixture in saucepan
5.) Bring just to boil
6.) Cool and blend in vanilla

The rest is up to you! Cover with chocolate or powdered sugar, fill with ice cream, whipped cream, or berries... make it your own!! Here is a picture of Martha's profiteroles with vanilla gelato and raspberry coulis to tickle your taste-buds and get your culinary creativity flowing! 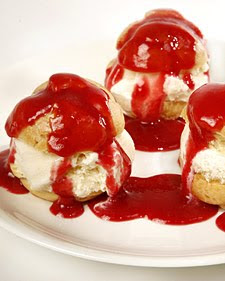 Georgetown Cupcake to take on TLC!

On July 16, "DC Cupcakes" will premier at 10 pm EST on TLC. I've heard rumblings about this show since the fall and am thrilled to see that there is an air date!! Here is an excerpt from a recent write up from  TheGeorgetownDish.com  with the show's executive producer, Terence Noonan:
The Dish: So how do they make five thousand cupcakes every day? TN: Well, I met Sophie and Katherine when I ordered cupcakes for someone's birthday two years ago, and I thought to myself, How do they do this? And when you have to make that many cupcakes every day, there are always things going wrong.
They have to turn out perfect cupcakes because that's how they've grown their reputation, and they crash every single day .... The shop is filled with lots of people, them, employees, their mother, because every single day they start from scratch. They don't use frozen batter from the night before, so they have bakers, managers, young people, lots of people crowded in there.
The Dish: So it's a reality show... Did they approach you for that?
TN: It's a reality show ... and it lets you know the good, the bad, and the ugly of cupcake making. I think the interesting thing about Sophie and Katherine is they always wanted to have a baking show. And for two years they worked really hard to get themselves out there, going on The Today Show, Martha Stewart's show, get the attention of the media, and get a TV show. They built their brand up and it paid off.
People always think, how does this happen? I literally cold-called them, said, I don't know you, you don't know me, but I'm a four-time Emmy winner, I wrote a book called Starring You!, why don't we work together on your brand and your PR, and getting exposure. We literally started shooting home video on the weekend, and ultimately, it led to a show getting sold to TLC.
Wow! What luck!! Can't wait to set the DVR and take notes!! Will you watch??
Pin It
at 6/22/2010 12:45:00 AM 0 comments

These cupcakes were so fun to not only make, but also research for! We made some monkey faces, yellow hats, and of course, bananas!! 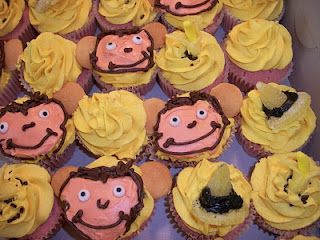 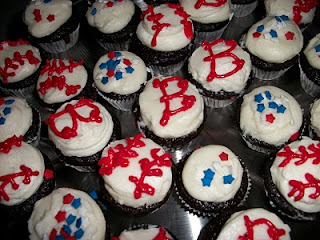 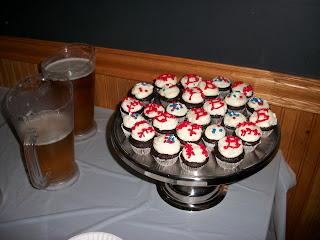 What's not to love about these pink cupcakes? 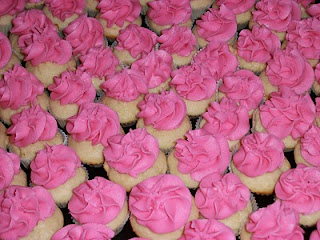